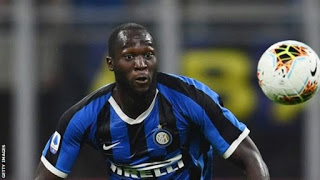 Cagliari have been cleared of racist chanting towards Inter Milan striker Romelu Lukaku in a Serie A match.
Chants were aimed at Lukaku as he was about to take a penalty in a 2-1 victory at the Sardegna Arena.
But according to a sports judge acting on behalf of the league, there was not enough evidence for any sanctions.
The Sardinian club were, however, fined 5,000 euros for throwing plastic bottles on to the pitch away at Parma on Sunday.
The report admitted that chants, shouts and whistles were directed at Lukaku by Cagliari fans, but they were not enough in “size and perception” to bring about any form of punishment against the club and its supporters.
This is the third time that the club has been investigated for alleged racist abuse in the last two years after cases involving Moise Kean, the Italy forward now at Everton, and his then Juventus team-mate, France international Blaise Matuidi, but no action has been taken on each occasion.