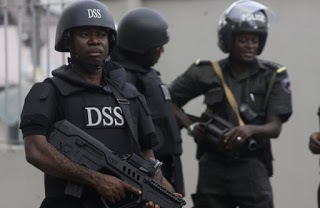 Nigeria’s Department of State Services (DSS) Monday said some individuals and groups under the guise of political differences with the current government are working to destabilize the country.
“The DSS wishes to reiterate its earlier alert to the nation of plans by subversive groups and individuals to undermine national security, peace and unity in the country,” DSS spokesman Peter Afunaya said in a statement.
“These elements are determined to exploit political differences and other occurrences, within and outside the country, to destabilize the nation. They also initiate narratives to deepen their subversive objectives so as to achieve preferred illegal outcomes.”
The spokesman of the secret service did not mention any name or group but said the service would not relent in its bid to secure the country.
He said the aim of the individuals and group is to “set the country on fire as well as inflame passions across ethnic and religious divides with expected violent consequences.”
Afunaya also urged Nigerians to be conscious of fake news and unsubstantiated information spread across social media platforms to deceive and incite sections of the populace to civil unrest.
“While condemning the unpatriotic and misguided activities of these anti-social elements, the Service equally warns them to desist forthwith from their unholy acts as the full weight of the law will be brought against them,” Afunaya said.
He urged Nigerians to remain law-abiding, peaceful citizens and not hesitate to report any suspicions likely to threaten public safety to appropriate authorities.
Afunaya assured Nigerians that the service will “remain committed in its pursuit of national stability in line with its statutory mandate of protecting the country against crimes and threats to its internal security.”