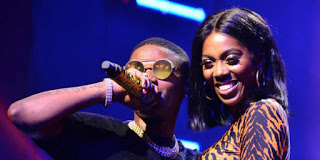 and Wizkid have again become the topic of discussion after a video of Wizkid smacking her ass surfaced on social media.
This could be the final evidence fans have been waiting for after the release of his controversial “FEVER” video.
Many have suspected without proof but we would allow you, the fans become the judge of this.
See video as you share your comments below;

454 people are talking about this