Shey Davido is Joking ni!!! He just annouced that he is Getting another private jet.
Maybe the Davido just want to get his own Private Jet nwow, as he later revealed the before PJ was for his Dad.
However, in a Q&A session on his Twitter page, a fan jokingly said people are already carrying about the rumour that he has bought another private jet, expecting an hilarious or cryptic answer; Davido responded to the fan saying “another one is actually on the way.”
See Tweet below:- 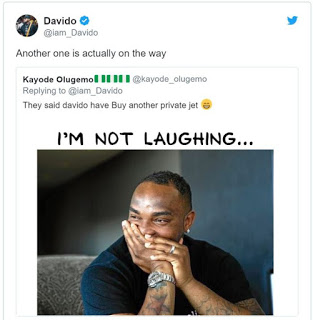